In the last couple of months I have found some special models to expand my collection with but the most special is the one showed below. Remember the post where I received a painted Accent Green (February 2015) and totally reworked it to remove the paint? Well, it is no longer alone. 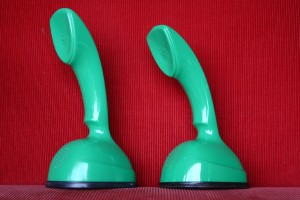 A few weeks ago I got the opportunity to buy another Accent Green. I was not sure what model is was, but since the price was right it did not really matter. There was a slight suspicion it was a New Case, and when I received it yesterday, it definitly turned out to be one.

The Old Case is ‘rather common’, there are more collectors who have one, but the New Case is not so regular. At least that is my vision, because I have never seen one before. I know that Richard from ericofon.com has listed one in his collection recently.

It is a fully original Ericofon from 1960, with color code 520547. Even the ring around the microphone is Accent Green. The chassis is a K7 with an Ericotone 2 ringer. This color was produced until the early 1960’s and not sold in other markets than the US so most of them are Old Cases. By the way, the Old Case is from 1959. Comparing the detailed dates, the breakpoint of the Old to New Case should be around Q4-1959 – Q1-1960.

The phone is in a very good shape, only a few minor marks on the shell. The Old Case, and this picture makes that more visible, is a little less shiny. This is because of the sanding and polishing process.

If all is well there are 2 more nice phones on their way and I hope they will arrive in a week or 2. and that should be it for 2015 I expect.  I am broke… Will keep you posted.

1 thought on “The Dreamer Is Still Asleep II”