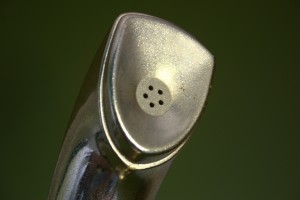 Yeehaa! Today I received my Aztec Gold Ericofon. The gold paint has some wear and needs to be restored here and there. But that I already knew upfront. Actually I did not have too much time this evening to check it out but there is one thing that I wanted to know: the insides.

I unpacked it and removed the chassis to check what was inside. Hmm… 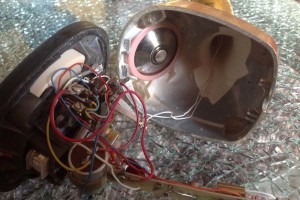 So what do we have?

A K14 rotary chassis with an Ericotone version 3 ringer and a standard North Electric dial face. The shell was something to puzzle about. It is a Taj Mahal TouchTone shell that was adapted to fit a rotary chassis (thanks Richard!). Looking into the shell you will see that there are plastic cubes glued into the shell to fit the 4 screws. The receiver is soldered directly to the contacts because the contact pads are missing. Also the microphone is glued into the shell. A weird combination of parts, most likely put together by North Electric.

Update the day after: 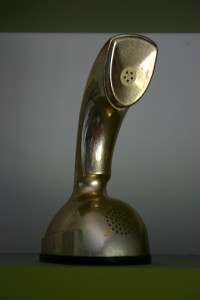 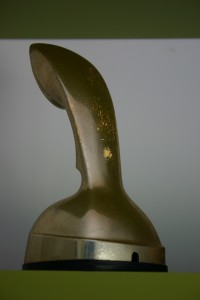 As you can the see the  shell has some wear and damage on the paint. In the next few weeks I will try to restore this. Not sure yet how I want to do this. The advantage I have is that the surface is not very smooth. It looks like, and that is the purpose of this Aztec Gold, that small water drops are all over the phone.

In the pictures below you can see the details of the shell and the contacts. Since the shell is a Touch Tone, there are no brackets to mount the chassis on. This is resolved with the plastic parts glued inside the shell. Very creative. The speaker is glued into the shell as well and can’t be removed. The contacts are fixed to the speaker wires. 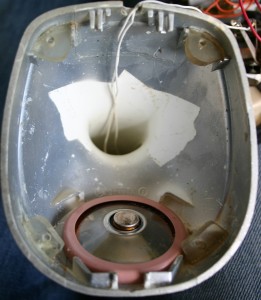 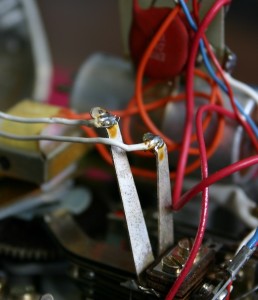 The strange thing is that under the dial face the chassis is marked with week 19, 1972. On the top of the chassis it is dated with week 42, 1974. My conclusion is that the original chassis was made in 1972 but that this phone was put together in 1974. Because Touch Tones were produced until 1972, the stock with TT shells was obsolete in 1974 and used for other purposes.

As I understood, the Aztec Gold phones appear in different versions (rotary, Touch Tone and also with a flat ear-piece). This Aztec Gold was produced in the aftermath of North Electric, just before they sold their Ericofon assets to CEAC.