This week is Sinterklaas in The Netherlands. And of course I have a wishlist of Ericofons I still would like to have…

Naturally I was careful what to wish for, but this time I got some real nice items. In the next few weeks I will post some pictures of nice phones that will arrive. Originally I had 4 phones, but one owner did not sell in the end. So three very nice items remain, still a very nice catch. I am not going to say anything more, not to spoil anything. It is a surprise for me too! 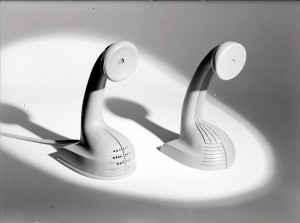 Not on my wishlist, you have to stay modest, are the 1941 prototypes of  the Ericofon above. This image was taken from the Ericsson archive.