In the late 1970’s, when the Ericofon became less popular, the company Nichco Inc, in Mansfield Ohio decided to spice up the Ericofon again. With remaining stock of the Ericofon they sort of launched a metallic series of Ericofons. The painting was done in a professional way. If you ask me it is more professionally done than the CEAC paintings. It is not certain how many different metallic colors were produced. Richard Rose has 12 different in his collection at this moment if I am not mistaken. 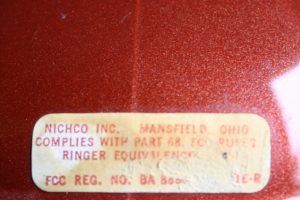 Nichco also produced phones themselves and here and there some of the phones pop up. But I know them mainly for the metallic line of Ericofons. A typical sticker of Nichco can be seen on all of their phones, including the Ericofon painted by them. By the way: it is only a 30 minutes drive from Galion (North Electric) to Mansfield (Nichco)…

Last week I was able to purchase this ‘metallic orange’ painted by Nichco. Starting to photograph the metallic surface, it is hard to grasp the actual color. When there is a lot of light the phone is closed to orange, when there is less direct light it tends to brown.

The inside of the phone is an unmarked K7 chassis with an Ericotone 3. The Sahara shell is from 1973, as is the microphone.

Here’s an indication of the color, compared to the BPO Orange and Mandarin Red. The first picture was made in direct light, the second a bit more in the shades. 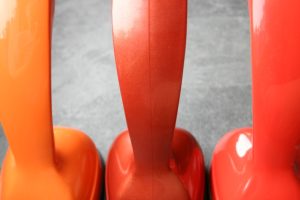 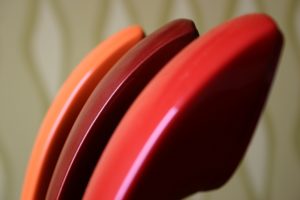 As this is not really the ‘pure’ Ericofon I was doubting if I should go for the metallic series as well. But as it is part of the official history, this seems to be the only logical way forward. As pure as it can get.

Yesterday I purchased another Nichco metallic model in a beautiful dark green color.  Can’t wait to see it in real life. 🙂