Recently got a page of Time Magazine from 1961 containing this Ericsson / Ericofon advertisement. Lovely to see the historic context.

I certainly do not hope that the electronics of the Saab 37 Viggen were of the same complexity as that of the Ericofon… 🙂 Designwise there should be a tighter connection I expect.

Quality for sure is recognizable as many Ericofons still work, even after more than 50 years.

Of course you must see this picture in the right historic perspective. This advertisement is already over 55 years old and published at the peak of the cold war. Luckily times have changed. Ericsson has abandonned military involvement already many years ago and focusses still today on what it can do best since 1876: telecommunications.

A small clip that I encountered on Youtube last week. Broadcasted by the French TV station Arte in 2006, a small history of the Ericofon. For the linguists amongst us as it is in French.

Digging though the web (as if I do not have anything else to do) I stumbled on this very nice Dutch picture that I want to share with you.

It is very nice to see a shop window like this, never saw a Dutch image like this before. Looking at the time the Ericofon was introduced in The Netherlands, I expect the picture must be made around 1978/1984. However the images give more a 1960’s feeling to me. The photo was made by Piet Koks who seems to be a former Ericsson employee.

Translation of the texts: -“The Ericofon is ideal“- -“Getting older? No staring, you have the dial in your hand” – -“At the reception. Elegant device in modern design“- -“On every small spot. The Ericofon does not need more space than a cup and saucer“-, and last but not least -“In the bedroom. Horn and dial in one“-.

In fact the first slogan is a strange text as the Ericofon was marketed as Ericofoon and not as Ericofon. The relation between a cup and saucer and a bookshelf is something I cannot really see. All slogans that would not survive anymore in this world, but they are so cute, I had to share this in the future.

This week I found a nice short article as published in the ‘Nieuwe Leidse Courant’ on May 22nd 1970. I have translated the text below in case your Dutch knowledge is not that well developed. This was approximately 8 years before the Ericofon was introduced in The Netherlands. Can you imagine that one model has such a long lifecycle today?

According to an investigation in West-Germany, 8% of our neighbors has a telephone in… the bathroom. In that same room, 38% of the Germans read. The bathroom is becoming a sort of relax-room, a new status-symbol. Of course a room like that deserves a special telephone.

A bright future is being predicted for this modern model where – we cannot see it very well in the picture – the dial face is in the bottom of the phone.

The Ericofon is available in 9 different colors so you are able to extensively harmonize with your interior: red, pink, yellow, green, blue, gray, ivory, tan or white. ALL parts, microphone, telephone and dial face are combined in one thermoplastic housing.

The phone has a comfortable fit in your hand, and when one picks up the phone, the dial face comes towards you. This is extremely handy for ill people, the elderly or very hasty businessmen.

A few weeks ago I received unique pictures of the Ericofon, showing the heart of the phone. 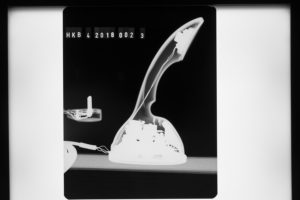 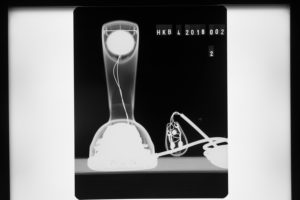 If you look at the right picture above and the last picture in the Sewn Open  post, you can see that the bar is obviously a ‘standard’ that occurs more often in flat earpieces. But still no clue why…

Well, this is quite something!!

On Twitter I found this interesting experiment that someone has done in the Coda Apeldoorn. In the cultural center in Apeldoorn, Netherlands, there is this so called FabLab, where you can experiment with technology. Obviously last summer someone created a new rubber gasket for an Ericofon with a 3D printer. Cool!! 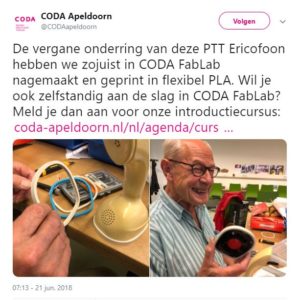 Three notes on the picture: the picture was taken from Twitter, the person in the picture is not me (!!) and the color of the gaskets is terrible 🙂

The gasket was printed in 3D with the use of PLA (PolyLactic Acid). This is not actually a plastic as you would suspect but a substance made of wheat, corn and sugarbeets. It is much more sustainable than ABS (Acrylonitrile Butadiene Styrene) which is actually made out of oil. A very nice experiment!

James John Walrod unfortunately passed away on September 25th, 2017 at the age of 57. Way too young!!

He was called a design guru. Actually if you read the Wikipedia description it says: “A self-taught interior design consultant and collector of rare and unusual art, design and pop culture works, Walrod was also considered an expert in the field of mid century and Postmodern design.” Please take some time to read about this personality.

Part of his collection was auctioned earlier this year in 2018. When I browsed the auction catalogue many very nice and beautiful items passed by. Man, this guy had good taste, no doubt about that!!

I was triggered because there was one item that caught my attention in this auction. A Wedgwood Touch Tone Ericofon. Still lacking in my collection and quite hard to get…

So I decided to take part in the auction. As usual, auctions are kind of exciting when they start. That night most sales prices raised to exorbitant heights before it was the Ericofons turn. As I am not a design expert these prices might be around normal market value, I had no clue. But I was getting nervous and already disappointed, afraid that this Ericofon also would be sold for an unreasonable price, just because of the name of the owner…

Luckily it turned out differently and I was able to get this item for a fair price. A bit on the expensive side, but hey, …a once in a lifetime opportunity.

Very proud that this is now part of my collection.

In remembrance of Jim Walrod.

Copyright of these 2 beautiful pictures is at Wright.

In my hometown we have the ‘Textielmuseum‘ (Museum of Textiles) for many years already. It is there because the city has an history in the production of textiles and fabrics until the 1960-70’s. Production was, around that time, slowly moved to other, lower cost countries. And all that was left were empty factories which in the end became part of the cities industrial heritage. 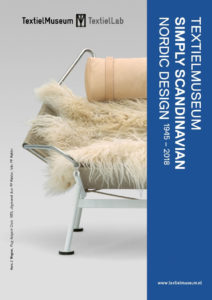 ‘Does this information have anything to do with Ericofons?’ I can hear you say. Of course the main subject will be related to fabrics I expect. I was asked to deliver an Ericofon to match the exhibition. There will be other items shown as well as I understood.

It would be an honor to do so, no doubt about that. A shiny Mandarin red Telia Ericofon will appear somewhere in the exhibition. I am really excited.

Besides the Ericofon, I expect the exhibition to be very interesting as well. So please support the museum and go there!! They have lots of interesting stuff.

As said, the museum exists for a long time already and I can remember the first time I visited it, over 40 years ago. It must be back in 1975 or so…  It was in the pre-GPS-era so we got lost on our bikes going there with some schoolfriends.  But in the end we managed to find the museum.

It was there, it is still there and it will always be there.

Today we were invited to the opening of the exhibition. It was fantastic!! If you are interested in design I can for sure recommend it to you. Not only the Ericofon was there, which is a reason in itself…, but many other items that you might recognize from the early days. 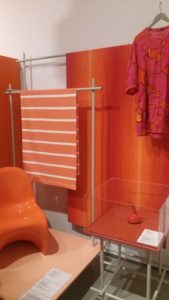 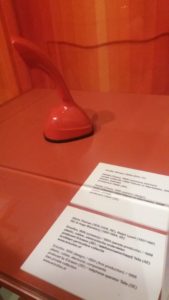 The exhibition will be there until November 11th 2018.  Worth mentioning that the Textielmuseum was ‘Museum of the year 2017’.

But in the end all I can say is that the museum is still there… and that you have to visit it!!

Some time ago I received professionally pictures made by Josefina Eikenaar for the Textielmuseum. Two of them are shown below, much better than the ones I made. 😉 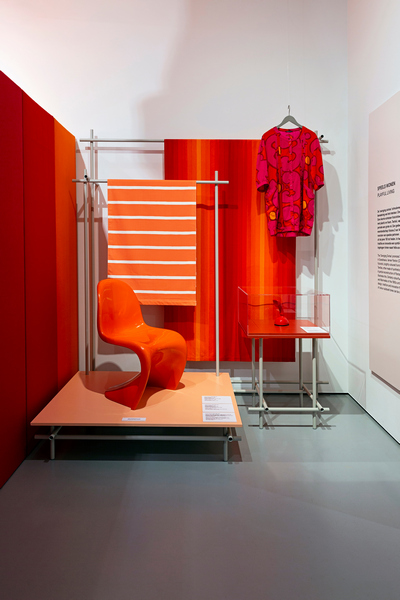 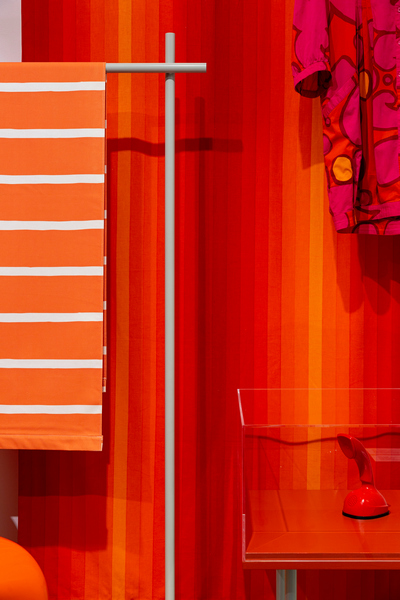