This box of the Ericofon originally contained a Sahara phone as you can read. “Manufactured by North Electric Company, Galion Ohio” it says on the side of the box.

But what does the information mean on this side? It gives some more insight on the specifications of the phone created by North Electric.

6 70: This is a date indication. The phone dates back to the 6th week of 1960. Guess this was the date that the box was filled and left the factory. This type of indication you can find all over the place on the Ericofon. On shells, on chassis… Typical forms of appearance are 06 70, 0670, 7006 or 70 06 as well. So if anything looks like a date, it most likely is a date.

522726: this number indicates the whole Ericofon and can be used for ordering a specific type of Ericofon. Here’s a part of the documentation from 1962 describing the codes for the 8 specific colors that were available. Actually it makes the next two indicators obsolete as this number says it all. 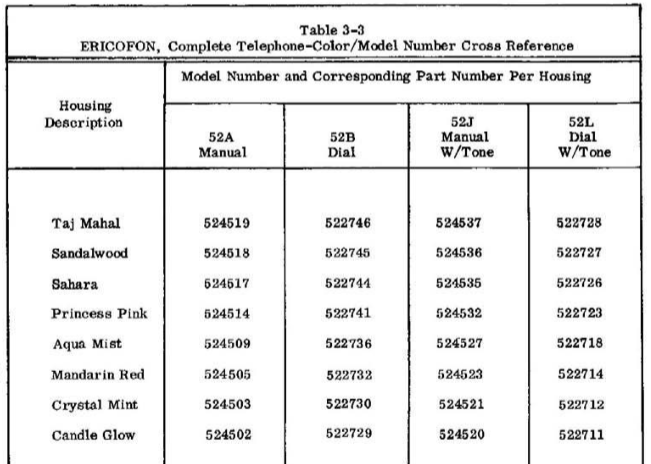 Sahara: obvious what this means I would say. 😉

52L: This is indicating the type of phone that was in the box. Here’s the part of the documentation from 1962 explicitly describing the 4 types of Ericofons.

The information above is only referring to North Electric. On top of this the model 60A was introduced, meaning the Touch Tone model.

In other countries other labelling was done. In the United Kingdom the Ericofon was labelled as ‘600’. In sweden the Ericofon was called DBJ500. Of course we all know the ‘700’ type as well, only available in Europe.

For me this particular box came with an Old Case Candle Glow from 1957… not too bad either. But for sure not the original box.