Since the Ericofon is such an icon in design, not only in Sweden, but also in the rest of the world, it can be found on many occasions and in many books and movies.

But that is not all.

In December 1999 the Swedish postal services issued a stamp with the Ericofon printed on it. It was part of a series of 10 stamps indicating the many Swedish landmarks in industry and society during the millennium that was going to end. 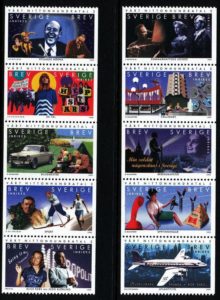 The series is called ‘vårt nittonhundratal’ meaning ‘our twentieth century’. This is the second series of 10 stamps.

So the Ericsson Ericofon is there, on one stamp called ‘inventions’ with the pyramid package from Tetrapak and the Volvo 3 point seatbelt. Good company, right?

By the way, the Ericsson T28 cell phone is on the series 3 stamp ‘technology and inventions’.