Sometimes phones are yellowed over time. Because of the sunlight or because of a heavy poluted environment in a smokers home. Smoke has the most equal discoloring, sunlight is more capricious. You will be surprised how much a phone can be discolored. White turns to yellow, Sahara becomes Harvest Gold and Wedgwood looks brown/green. Terrible, and it hurts to see this. 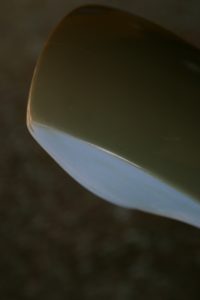 Normally I will sand those phones, remove the polution by removing the upper layer of the phones’ surface. You can see it in the picture above where the side has been sanded (not polished) and the back is not yet done.

A few weeks ago I read an article on ‘bleaching’ phones with Hydrogen Peroxide. Some collectors seems to have some good experiences with this. Time for an experiment so I bought myself a litre of this stuff… 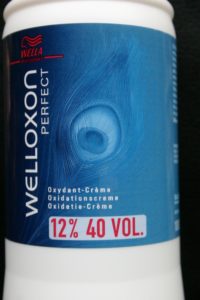 It is Hydrogen Peroxide, 12%. This bottle I got from an online hairshop for about 12 USD and is to be used by professionals. It is also called ‘developer’. After shocking my family that it was to be used on my own hair, I told them the actual purpose.

And… it is a gel/cream, not a liquid. Otherwise it will drop of your phone right away.

Picking a candidate phone was quite easy. I wanted to start with just a little risk for the first time. So a ‘not too strong equally discolored PTT White phone’ was the subject. Here’s a picture of the victim: the second from the right. The one on the left is pretty close to Taj Mahal, the one on the right is closer to Candle Glow. 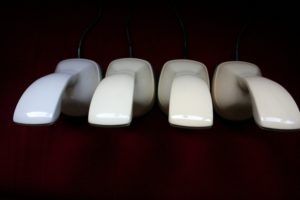 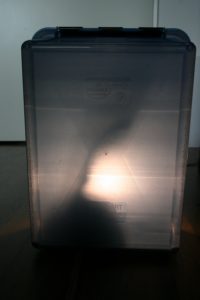 As Hydrogen Peroxide works best when you increase the environmental temperature I decided to put the phone in a box. In front of the box I put a 200W lamp which got pretty hot.

The cream was applied on the phone in a thick layer with a brush. So thick that it just not starts to drip off.

After 4 hours I was so curious and decided to get the phone out and to see the result of the work done sofar.

The result was not too bad, but I noticed that the phone was discolored in certain areas. The result can be seen below. As the lamp was 20 to 25 cm from the box, there was a strong heat source from one side of the phone. What I noticed was that the phone was getting whiter on the side of the lamp, and not on the ‘dark side’. Also the cream did its work better where it was applied thicker. So some stains were the result which can be seen here. 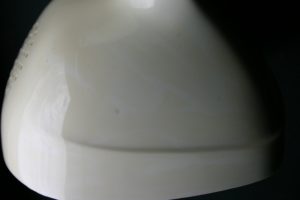 In the second setup, to have a less focussed/bundled heat source, I decided to have the phone on top of a radiator. The heat, being warm air, in this case is going up, equally spread on all sides of the phone. But the phone not being in a box desiccated the cream. The result after another 4 hours was pretty good. The back of the phone was lighter than before, most of the stains had disappeared. So equally applied heat is better than a strong source. Maybe an oven would work best…

The last and final experiment was inside a box, on the radiator. Again I applied a thick layer of cream on the phone, closed the box and left it there for another 6 hours. The temperature in the box had raised to 43 Celcius (109  Fahrenheit) when I came back. 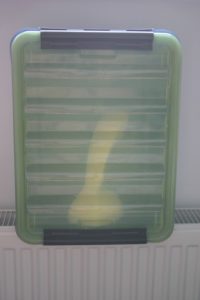 The result is actually quite good. The cream was not fully dry, on the inside of the box some moist could be seen. The final result can be seen in the pictures below. Not bad at all!! 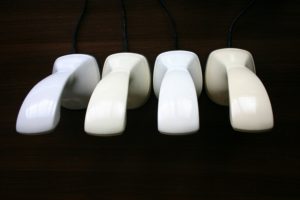 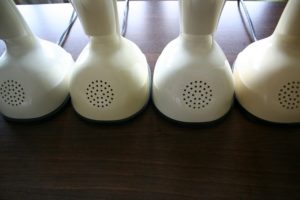 As already said in previous posts, it is hard to make pictures of colors exact as they are in reality. But this row of phones is the same as the ‘before’ picture. So there is quite a difference as you can see on the second from the right. It is close the Taj Mahal now, 2 tones lighter than before. The surface of the phone is shiny and smooth, no damage done at all.

The next candidates are already in the oven, ready to be cooked. A Taj Mahal and a Persian Gray. Both heavily discolored because of the sunlight. 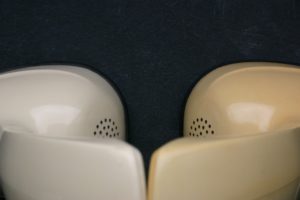 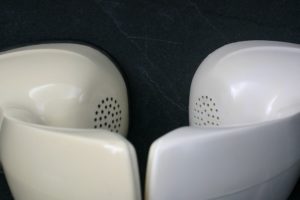 The advantage of oxygen based cleaning is that it is non-toxic and eco friendly. Chlorine products, which can also be used, are extremely toxic and harmful to the environment. On top of that, they tend to be detrimental to fabrics over time.

Seen the success of this method I bought some more of this stuff. Coincidently I ran into this truck this evening. Howmany phones could one clean with 30,000 litres? 🙂 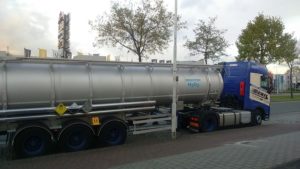 Please note that white and gray Ericofons are a success until now. Pink is a more difficult color and bleeches out to a lighter shade, I recently messed up one. So be carefull what you do and do not use this on your most precious phone before knowing exactly what the effect is.

Last weekend I cleaned a Sandalwood shell. After the bad experience with the pink one, I decided to do sessions of 1 to 2 hours, depending on the heat (sunlight this time, it was 25 degrees Celsius 🙂 ). After a session I washed the phone and checked the effect. Four sessions were needed for this one and the result is great. It is good to intermediate check the status and wash off the old cream. This time I applied the cream in a thin film on the shell, not too much. The result: just great!!