The Ericofon was made in 3 different shapes, looking at the shell. But also in a functional way there are 3 types. There is one with a dial face, a touchtone and a… dial-less model. The latter is also referred to as the Manual Service or CB model.

So far I have only seen these in the new case type and not in the old case. But I heard from a friend collector that he has one, in the Swedish variant. So they do exist in old case as well (~1960), and than I mean of course in an original setup and not put together in a later stage. Colors could be any color available, but gray is the most common. The “dial face” appears in 2 types, the Swedish as shown above and a North Electric type (which I am still looking for).

Usually these phones were used in places where there was no need to dial or you were not allowed to dial. One can think of e.g. hospitals or elevators as places where these could be spotted. However, there could also be special type of CB models, custom made for the occasion. Bob Mills refers in his book to the Australian Department of Civil Aviation, or even the Air Force, where they used them in control towers. “These sets were probably always grey and had no dial mechanicals, no induction coil and a microphone in place of the transmitter. The switchhook springs simply disabled the receiver and the microphone when the instrument was set down. What appears to be a locally made printed circuit board was mounted horizontaly above the chassis to interconnect the cords and components.”

The shells and chassis are always from the dial version. The chassis is stripped and misses the dial mechanics. There are types with and without ringers. 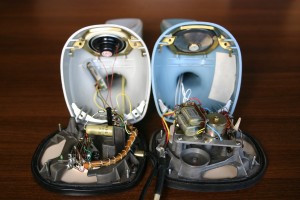 Two ‘common’ examples, they are still rather hard to find, can bee seen above. The left model is also equiped with a PBX button. The exact function is not known to me but it is for sure custom made as you can see the microphone being directly wired to the chassis.

Last week the North Electric manual phone arrived. It is an Aqua Mist flat with Ericotone, in pretty good shape and fully functioning.  There is a small scratch on the dial face but since these are hard to find in Europe I guess I have to handle that. Although the typical chassis; without dial mechanism; is from 1958, the rest is of 1964. A beautiful year. It is replacing the Aqua Mist that was already there and will be passed to another collection. Below is the new phone on the right. The one on the left is just another LME manual. 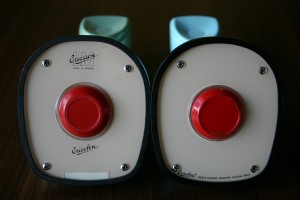