Who’ll tell which phone is what?

Today I received my North Electric Brown phone. A real one this time, after the interesting but slightly disappointing CEAC model (see post of December 2014).

Here are the 3 brown Ericofons in a row. There is a slight color difference between the CEAC and the NE. The PTT brown can clearly be recognized. 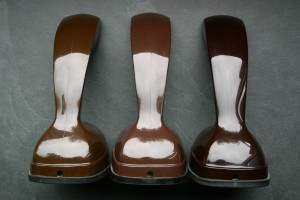 The inside of the North Electric shell does not reveal any information on the production date. The chassis is from ’59 and the microphone from ’63. Does not say anything but if it is an original set, it was also compiled out of spare parts.

This week I ran in to a nice deal of multiple Ericofons from another dutch phone collector. He was more into older Ericsson telephones (1900 – 1940) and he has a beautiful collection of partly wooden phones. And some Ericofons for me to take over.

When I had a look at the set, there were 2 branded phones from the Academical Medical Centre in Amsterdam (AMC/AZUA). Both not in too good shape. The whole set was nice though. 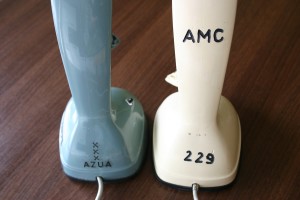 Especially the Wedgwood (1975) is nice. There is some history on the phone, used in the 1970’s/1980’s in a hospital, very obviously. AZUA means Academic Hospital University of Amsterdam and the 3 ‘X”s are the city arms. It also has a PBX button on the side. The Candle Glow (1971) is not so professionally branded with AMC 229 and therefor severely damaged so I will use it for parts. Seen the discoloring of the Wedgwood I do not think they cared too much about smoke-free working space at that time…

Coincidentally another academic hospital in Amsterdam (VU Medical Centre) had to be evacuated this week because of a flooding. Not because The Netherlands is partly below sea level, but because of a broken water service pipe. The AMC was able to help out by taking over patients, medical facilities and services. Not sure if they also took over the phone service. Maybe I can help here 😉

Today I restored the Wedgwood from the picture above. And I must say that the result is pretty good, again. The discoloring is totally gone. The blue color is okay now and it is shiny as before. There are no issues with  the surface of the phone. I do not know if I want to keep it or not since I already have a similar Wedgwood, which has an Arabic dial face. The only differences are the ‘branding’, the PBX button and the holes in the ear-piece (small circle). Dilemma!

The Candle Glow I have dismantled for parts. It was impossible to create something representative out of this. And I definitely need parts! Normally shells are a vast majority of the spare parts and chassis are for sure not.

The Wedgwood PBX phone was sold to a collector in Canada. Someone who was interested in telephones with a story. 🙂