For some reason this week is ‘the week of the brown phones’. Not sure what it is, but they seem to be everywhere these days…  🙂

Which reminded me of my Brown 700 I got in November last year. I purchased it from Ebay at a time that there was a lot of activity ongoing so I never posted anything about it but it just showed up in stealth mode in my collection.

I got a chance to buy it and although it was relatively expensive; it is not an obvious model and it is playing hard to get; it was a good deal. So I was very glad that I got it.

When I received the phone in the mail and I inspected it, I noticed a small damaged spot on the back. A very small crack or so, hardly to be seen, only with the right light. It must have been dropped once. Marks from daily usage in its 40 year existence. The lady who sold it to me, must not even have noticed it, I am sure. But that is not what I wanted to say about it.

There was a note with the phone and I want to share it here:

‘A bit of history of this phone!!

Thorn EMI merged with LM Ericsson in the 1970’s. My then husband was the production manager at Thorn EMI and was a fully qualified Post Office Telecommunications Engineer.

Thorn Ericsson as they became known, re-located from Rochester Kent to a purpose built factory in Scunthorpe in 1974 and we moved to that area with them.

Not long after that, this phone was purchased from the staff shop at the factory, it has been in my possession ever since.

The factory for Thorn Ericsson closed in the late 1980’s and the site is now derelict.

This phone has a long history, please look after it.’

Reading through the text I appreciated this phone’s history. A living ‘thing’. The crack is there with a reason. Something happened on a windy winter night… I imagine. This is not the first time that I get a phone with a personal note. Phones from childhood, from parents, from the attic etc. And that is what I like so much on collecting this model. Phones with a story, with a history. But this one was for some reason special. The text in the note touched me, written with so much memory and specially love.

Here it is, reunited with its family. Thank you, I’ll look after it!! 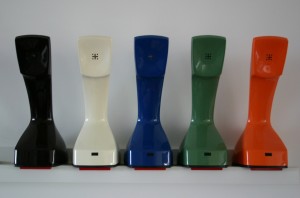