In the previous post I showed the Norwegian phone I received, with the Oslo specific dial face. It is nice to see it in combination with the, also deviating from the later standard, Telia dial face from Sweden.

The 2 are perfectly in reverse. 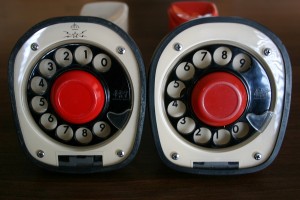 I expect that by now I have about 12 different rotary dial faces for the Ericofon. There should be over 20 around.

Most special are the Arabic and the typical Oslo dials.

Most wanted at this moment is the Chinese version. And, does a Cyrillic exist? Not sure.

Did you know that the first patent for a rotary dial was filed by A.B. Strowger on December 21, 1891? The early versions of the rotary dial used lugs on a finger plate instead of the holes as we know them. The rotary dial with finger holes were first introduced in 1904 but did not enter service in the United States until 1919, when AT&T decided to swtich from manual to automatic exchanges. Thinking about push buttons being introduced in the 1980’s on a large scale, the dial face did survive about 70 years of active service.

This morning I received a very nice surprise in the mail. First I didn’t know what it was but then I realized it was a package from Thor. Since we are both collectors, we have exchanged some models with eachother and now I received ‘something’. 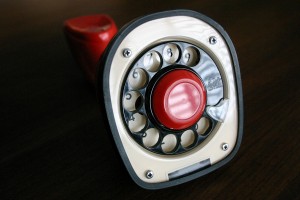 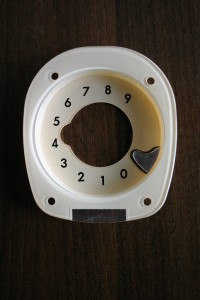 And here is: The New Backwards. A very new looking Mandarin Red shell equiped with a Norwegian Oslo dial face.

Totally in reverse. Only the ‘5’ should be the same in the pulse system 😉 About time for some international standardization I guess.

This one looks great. Thanks Thor! 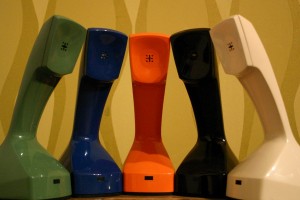 It happened to me last week. Thanks to a very friendly collector I was able to complete the 700 series. He wanted to get rid of the Blue 700 and I wanted it as a last piece in the 700 puzzle. So we came to a good deal for both. Thanks a lot Peter, I am so happy with it! She is in good hands.

Never dreamt to have the blue model so fast. But it is really there, nice and shiny, like new. It is a 12 button model from 1980, fully operational. 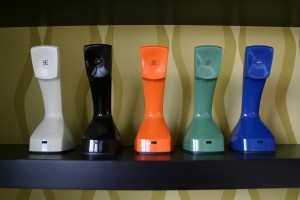 By the way, the pushbuttons of the 700 do not produce DTMF tones as you might expect. They produce pulses, similar to the rotary dial models. This is all state of the art pre-DTMF technology.